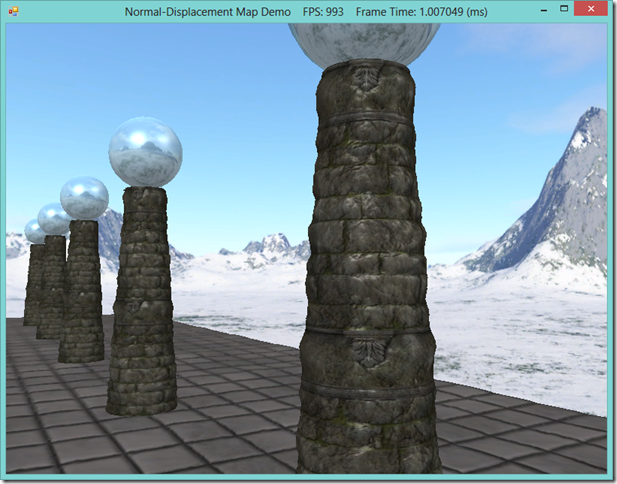 The tessellation stages can be broken down into three component stages:

First, let’s take a look at one of the techniques we have defined in our DisplacementMap.fx shader.  The Light1 technique is probably our most basic technique, using only a single directional light and no advanced pixel shading techniques.

Notice that in addition to setting the vertex and pixel shaders as we have done in our Basic.fx shader, we also have to set the hull and domain shader.  These two stage operate as a pair; you should always have a hull shader if you have a domain shader, and vice-versa.

Setting up to Render with the DisplacementMap Effect

To draw our geometry correctly with the tessellation stages, we have to instruct the GPU that the data in our vertex buffers defines a triangle patch, rather than a simple triangle.  Thus, we have to set the PrimitiveTopology to one of the PatchListWithXControlPoints enumeration members, rather than TriangleList.

Remember that our vertex buffer data, when using the tessellation stages, defines the control points of a patch, rather than actual vertices.  Besides the normal transformations that we would perform on a vertex, we also will need to calculate any control values that the tessellation stages will need for control points.  For our displacement mapping effect, this is a per-vertex tessellation factor, based on the distance of the vertex from the camera viewpoint.

Our hull shader actually consists of two parts: one portion that runs per control point that is to be output, transforming the input control points from the vertex shader into the form expected by the domain shader, and a parallel portion that computes the per-patch constants that instruct the tessellator stage how to subdivide the patch.  The first component is our hull shader proper, while the second is called the patch constant function.

The hull shader declaration has a number of attributes applied to it, which serve different purposes.

If we wanted to ignore a patch and not display it to the screen, for instance, if we implemented frustum culling in the hull shader, we can specify a tessellation factor <= 0.  This will cull the entire patch.

The patch constant takes as an input an InputPatch consisting of the control points for the patch, and an integer id, which identifies the patch.

The domain shader is invoked for each vertex generated by the tessellator.  The inputs for the domain shader are the patch constant data, computed per-patch by the hull shader patch constant function, the normalized position of the generated vertex within the patch, generated by the tessellator, and the control points of the patch, as returned by the main hull shader.  Generally, we will want to interpolate the final vertex data from the tessellated position and the patch control points.  Often, we will then modify this vertex data, for instance by sampling a texture and modifying the vertex position, as simply tessellating the patch will not add any additional detail.

For our DisplacementMap effect, we sample the heighmap stored in the alpha channel of the normal map, and offset the vertex position along the vertex normal using this value.  Note that we must project the vertex position into clip space using the camera’s view-projection matrix in the domain shader after we have modified the vertex world position.  Also note that we have to select the mip-map level of the texture to sample ourselves, using the Texture2D.SampleLevel method, since the Sample method we have used previously is only available in the pixel shader stage.

After passing through the domain shader stage, the generated vertices are passed to the pixel shader and processed as usual.