Howdy.  Today, I’m going to discuss rendering UI text using the SlimDX SpriteTextRenderer library.  This is a very nifty and light-weight extension library for SlimDX, hosted on CodePlex.  In older versions of DirectX, it used to be possible to easily render sprites and text using the ID3DXSprite and ID3DXFont interfaces, but those have been removed in newer versions of DirectX.  I’ve experimented with some other approaches, such as using Direct2D and DirectWrite or the DirectX Toolkit, but wasn’t happy with the results.  For whatever reason, Direct2D doesn’t interop well with DirectX 11, unless you create a shared DirectX 10 device and jump through a bunch of hoops, and even then it is kind of a PITA.  Likewise, I have yet to find C# bindings for the DirectX Toolkit, so that’s kind of a non-starter for me; I’d either have to rewrite the pieces that I want to use with SlimDX, or figure out the marshaling to use the C++ dlls.  So for that reason, the SpriteTextRenderer library seems to be my best option at the moment, and it turned out to be relatively simple to integrate into my application framework.

If you’ve used either the old DirectX 9 interfaces or XNA, then it’ll be pretty intuitive how to use SpriteTextRenderer.  The SpriteRenderer class has some useful methods to draw 2D sprites, which I haven’t explored much yet, since I have already added code to draw scree-space quads.  The TextBlockRenderer class provides some simple and handy methods to draw text up on the screen.  Internally, it uses DirectWrite to generate sprite font textures at runtime, so you can use any installed system fonts, and specify the weight, style, and point size easily, without worrying about the nitty gritty details of creating the font.

One limitation of the TextBlockRenderer class is that you can only use an instance of it to render text with a single font.  Thus, if you want to use different font sizes or styles, you need to create different instances for each font that you want to use.  Because of this, I’ve written a simple manager class, which I’m calling FontCache, which will provide a central point to store all the fonts that are used, as well as a default font if you just want to throw some text up onto the screen.

The new code for rendering text has been added to my pathfinding demo, available at my GitHub repository, https://github.com/ericrrichards/dx11.git. 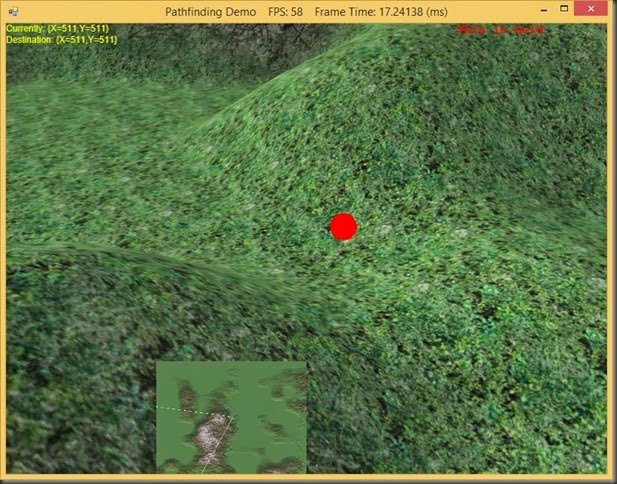