Last time, we looked at using cube maps to render a skybox around our 3D scenes, and also how to use that sky cubemap to render some environmental reflections onto our scene objects.  While this method of rendering reflections is relatively cheap, performance-wise and can give an additional touch of realism to background geometry, it has some serious limitations if you look at it too closely.  For one, none of our local scene geometry is captured in the sky cubemap, so, for instance, you can look at our reflective skull in the center and see the reflections of the distant mountains, which should be occluded by the surrounding columns.  This deficiency can be overlooked for minor details, or for surfaces with low reflectivity, but it really sticks out if you have a large, highly reflective surface.  Additionally, because we are using the same cubemap for all objects, the reflections at any object in our scene are not totally accurate, as our cubemap sampling technique does not differentiate on the position of the environment mapped object in the scene.

The solution to these issues is to render a cube map, at runtime, for each reflective object using Direct3D.  By rendering the cubemap for each object on the fly, we can incorporate all of the visible scene details, (characters, geometry, particle effects, etc) in the reflection, which looks much more realistic.  This is, of course, at the cost of the additional overhead involved in rendering these additional cubemaps each frame, as we have to effectively render the whole scene six times for each object that requires dynamic reflections.

This example is based on the second portion of Chapter 17 of Frank Luna’s Introduction to 3D Game Programming with Direct3D 11.0 , with the code ported to C# and SlimDX from the native C++ used in the original example.  You can download the full source for this example from my GitHub repository, at https://github.com/ericrrichards/dx11.git, under the DynamicCubeMap project. 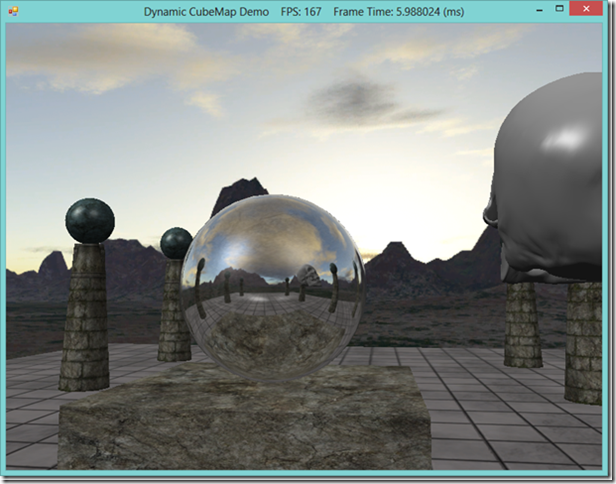