Shadow Mapping with SlimDX and DirectX 11

Shadow mapping is a technique to cast shadows from arbitrary objects onto arbitrary 3D surfaces.  You may recall that we implemented planar shadows earlier using the stencil buffer.  Although this technique worked well for rendering shadows onto planar (flat) surfaces, this technique does not work well when we want to cast shadows onto curved or irregular surfaces, which renders it of relatively little use.  Shadow mapping gets around these limitations by rendering the scene from the perspective of a light and saving the depth information into a texture called a shadow map.  Then, when we are rendering our scene to the backbuffer, in the pixel shader, we determine the depth value of the pixel being rendered, relative to the light position, and compare it to a sampled value from the shadow map.  If the computed value is greater than the sampled value, then the pixel being rendered is not visible from the light, and so the pixel is in shadow, and we do not compute the diffuse and specular lighting for the pixel; otherwise, we render the pixel as normal.  Using a simple point sampling technique for shadow mapping results in very hard, aliased shadows: a pixel is either in shadow or lit; therefore, we will use a sampling technique known as percentage closer filtering (PCF), which uses a box filter to determine how shadowed the pixel is.  This allows us to render partially shadowed pixels, which results in softer shadow edges.

This example is based on the example from Chapter 21 of Frank Luna’s Introduction to 3D Game Programming with Direct3D 11.0 . The full source for this example can be downloaded from my GitHub repository at https://github.com/ericrrichards/dx11.git, under the ShadowDemos project. 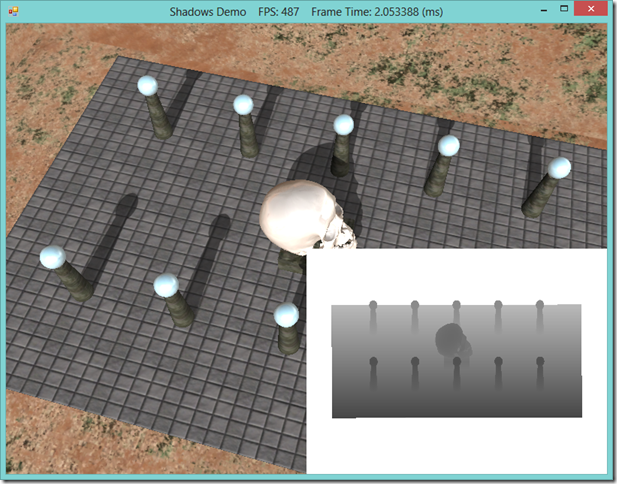