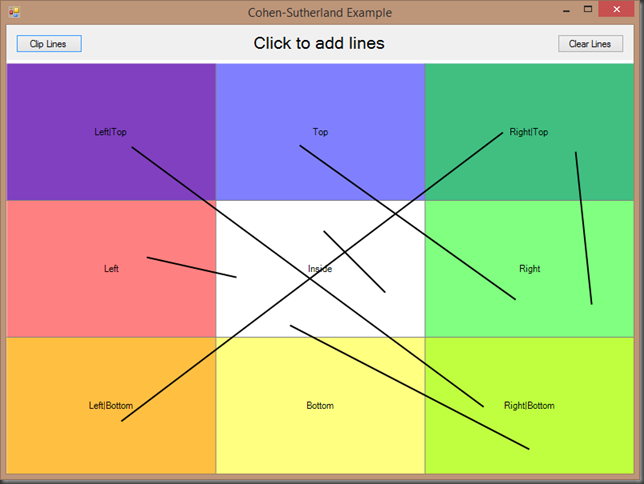 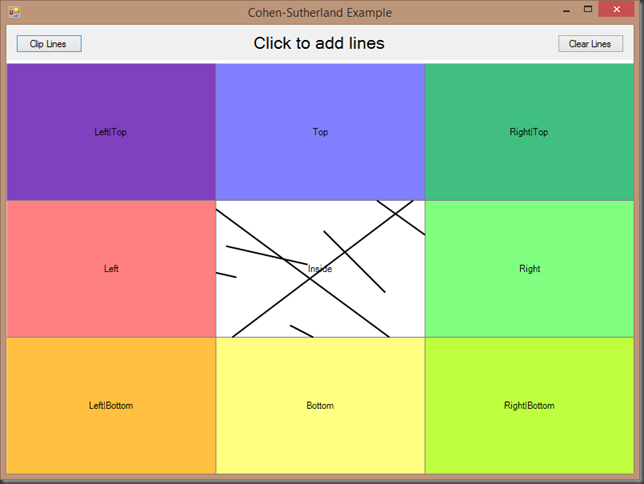 NOTE: I apologize if this looks all screwed up, with extra line breaks.  Blogger is terrible and loves to mangle the html I try to post up with Windows Live Writer.  I’m looking at moving off it for something else soon.

The Cohen-Sutherland algorithm relies on the insight that we can divide a 2D rectilinear space containing the clipping region into nine different regions, where the center region is our clipping region.  Using bit-wise operations, we can classify these nine regions using a 4-bit bitvector.  For readability, I’m using an enum with the [Flags] attribute, but using an unsigned byte would work equally well.  These values are often referred to as outcodes.

You can see how these outcode values are used to classify the space in the screenshots above.  Since they are bitwise flags, we can represent the top left region as Top|Left = 0x9, for instance.

With our outcodes defined, it is simple to classify a given endpoint of a line segment and determine its position relative to the clipping rectangle by comparing the X and Y coordinates of the point against the bounds of the rectangle.

Note that the conditions testing the Y coordinate are flipped compared to the Wikipedia example – WinForms and most other graphics libraries define the origin of their coordinate systems in the top-left corner of the screen, rather than the bottom right as is common in mathematics.

For convenience, I’ve also provided an overload of this method that takes a System.Drawing.PointF, rather than the separate X and Y coordinates.

After classifying the endpoints of the line, there are three cases to consider when clipping the line.

Here you can see the three cases illustrated:

Clipping an Endpoint to the Rectangle 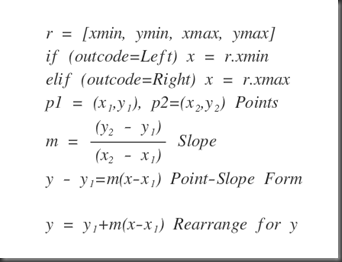 To clip against the top and bottom of the clipping rectangle, we cannot use this formula directly.  In the case of a vertical line, we will end up with a slope that is undefined.  So, we have to something a little tricky.  If we pretend that we are using a coordinate system that is rotated 90 degrees, and swap our x and y coordinates appropriately, the same formula works for clipping against the top and bottom edges of the clipping rectangle.

I was initially going to have this return the custom LineSegment object that I’m using in my Voronoi map code, but decided on using a more general Tuple<> instead.

Hopefully I make some progress on my Voronoi maps code.  It looks pretty cool, but it’s not terribly useful except as eye candy until I get the connections between the generated polygons generated.