Pathfinding II: A* and Heuristics

A* is one of the most commonly used pathfinding algorithms in games because it is fast, flexible, and relatively simple to implement.  A* was originally a refinement of Dijkstra’s graph search algorithm. Dijkstra’s algorithm is guaranteed to determine the shortest path between any two nodes in a directed graph, however, because Dijkstra’s algorithm only takes into account the cost of reaching an intermediate node from the start node, it tends to consider many nodes that are not on the optimal path.  An alternative to Dijkstra’s algorithm is Greedy Best-First search.  Best-First uses a heuristic function to estimate the cost of reaching the goal from a given intermediate node, without reference to the cost of reaching the current node from the start node.  This means that Best-First tends to consider far fewer nodes than Dijkstra, but is not guaranteed to produce the shortest path in a graph which includes obstacles that are not predicted by the heuristic.

A* blends these two approaches, by using a cost function (f(x)) to evaluate each node based on both the cost from the start node (g(x)) and the estimated cost to the goal (h(x)).  This allows A* to both find the optimum shortest path, while considering fewer nodes than pure Dijkstra’s algorithm.  The number of intermediate nodes expanded by A* is somewhat dependent on the characteristics of the heuristic function used.  There are generally three cases of heuristics that can be used to control A*, which result in different performance characteristics:

For games, we will generally use heuristics of the third class.  It is important that we generate good paths when doing pathfinding for our units, but it is generally not necessary that they be mathematically perfect; they just need to look good enough, and the speed savings are very important when we are trying to cram all of our rendering and update code into just a few tens of milliseconds, in order to hit 30-60 frames per second.

A* uses two sets to keep track of the nodes that it is operating on.  The first set is the closed set, which contains all of the nodes that A* has previously considered; this is sometimes called the interior of the search.  The other set is the open set, which contains those nodes which are adjacent to nodes in the closed set, but which have not yet been processed by the A* algorithm.  The open set is generally sorted by the calculated cost of the node (f(x)), so that the algorithm can easily select the most promising new node to consider.  Because of this, we usually consider the open list to be a priority queue.  The particular implementation of this priority queue has a large impact on the speed of A*; for best performance, we need to have a data structure that supports fast membership checks (is a node in the queue?), fast removal of the best element in the queue, and fast insertions into the queue.  Amit Patel provides a good overview of the pros and cons of different data structures for the priority queue on his A* page; I will be using a priority queue derived from Blue Raja’s Priority Queue class, which is essentially a binary heap.  For our closed set, the primary operations that we will perform are insertions and membership tests, which makes the .Net HashSet<T> class a good choice.

We will implement the A* algorithm in the GetPath function of our Terrain class.  This function takes the map coordinates of the start and goal map tiles, and returns the list of MapTiles that makes up the path between them.  If no path is found, the function will return an empty list.

Our first step is to check that both tile coordinates are valid and that the two tiles are connected as part of the same tile set.  If this is not the case, we can exit the function early and save the calculation costs; otherwise, the algorithm would have to expand all of the nodes in the tile set containing the start node before determining that there was no valid path.

Next, we need to reset the F and G costs of each tile in the map and create our open and closed sets.  Then, we calculate the F and G costs for the start tile, and add the start tile to the open list.  We calculate the H cost of the tile using the h(start, goal) heuristic function, which is a delegate function that we will cover more fully later when we discuss heuristic functions.

As mentioned previously, the selection of a heuristic to use in A* can make a big difference in the performance of the algorithm.  One important consideration in selecting a heuristic is to match the heuristic to the to the degrees of freedom of movement in your game map.  For pathfinding, we’ll often be using some sort of 2D grid for our map representation, so I have created a class containing some of the more common distance heuristics used in these kinds of grids.  This class, Heuristics.cs, also contains a definition for a delegate function, to enable us to easily switch between any of these heuristics, or even an arbitrary custom heuristic easily in our Terrain class.

These heuristics are tailored to different kinds of connectivity in our terrain map grid: 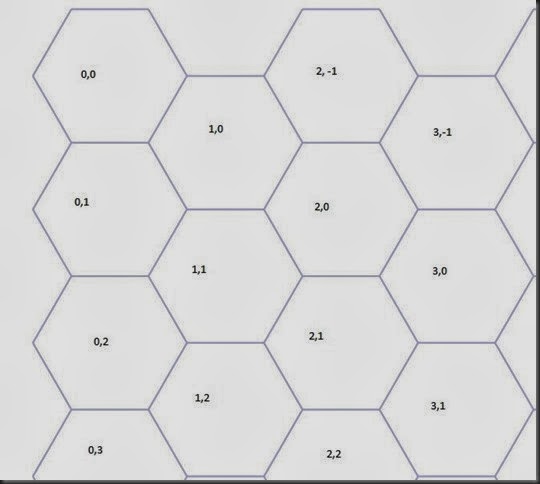 All of these heuristics calculate the cost of traversing an edge using a uniform cost of 1.  In our example, where the edge costs are determined by the vertical slope between tiles, this will always be an overestimate.

Next time, we’ll put these pieces together and develop a full example that puts our map representation and pathfinding algorithm into use to move a very simple unit around on our terrain.  To do this, we’ll need to revisit our picking quadtree, so that we can determine which tile on the map we are selecting, as well as its world position.