Refactoring Rendering Code out of the Terrain Class

Howdy, time for an update.  I’ve mostly gotten my terrain pathfinding code first cut completed; I’m creating the navigation graph, and I’ve got an implementation of A* finished that allows me to create a list of terrain nodes that represents the path between tile A and tile B.  I’m going to hold off a bit on presenting all of that, since I haven’t yet managed to get a nice looking demo to show off the pathfinding yet.  I need to do some more work to create a simple unit class that can follow the path generated by A*, and between work and life stuff, I haven’t gotten the chance to round that out satisfactorily yet.

I’ve also been doing some pretty heavy refactoring on various engine components, both for design and performance reasons.  After the last series of posts on augmenting the Terrain class, and in anticipation of adding even more functionality as I added pathfinding support, I decided to take some time and split out the code that handles Direct3D resources and rendering from the more agnostic logical terrain representation.  I’m not looking to do this at the moment, but this might also make implementing an OpenGL rendering system less painful, potentially.

Going through this, I don’t think I am done splitting things up.  I’m kind of a fan of small, tightly focused classes, but I’m not necessarily an OOP junkie.  Right now, I’m pretty happy with how I have split things out.  I’ve got the Terrain class, which contains mostly the rendering independent logical terrain representation, such as the quad tree and picking code, the terrain heightmap and heightmap generation code, and the global terrain state properties (world-space size, initialization information struct, etc).  The rendering and DirectX resource management code has been split out into the new TerrainRenderer class, which does all of the drawing and creates all of the DirectX vertex buffers and texture resources.

I’ll spare you all the intermediate gyrations that this refactoring push put me through, and just post the resulting two classes.  Resharper was invaluable in this process; if you have access to a full version of Visual Studio, I don’t think there is a better way to spend $100.  I shiver to think of how difficult this would have been without access to its refactoring and renaming tools. 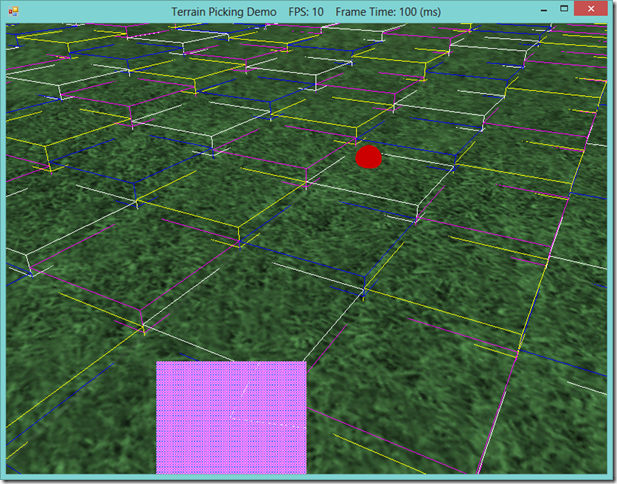