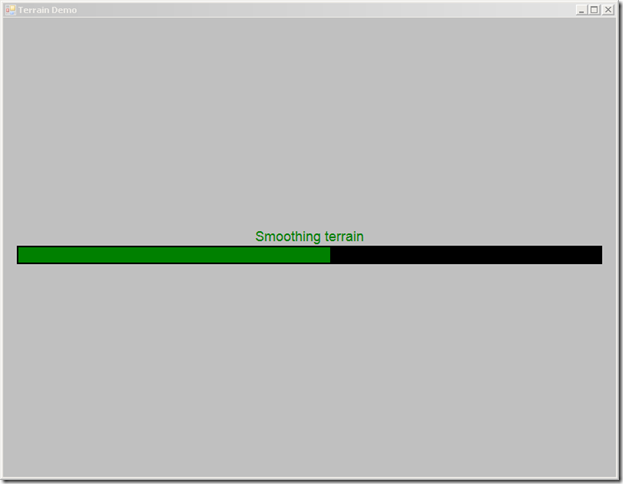 To use Direct2D, we need to create a Direct2D render target for our main application window.  To create this resource, we will add a new function to our D3DApp.Init() function, InitDirect2D(), which we will execute after creating the main window in our InitMainWindow() function.  It may be helpful to re-read my post on the D3DApp class, if any of this is unfamiliar.

Our first step is to create a Direct2D Factory interface. This Factory interface is similar to the Direct3D Factory that we used to create the DirectX11 SwapChain object; it provides a central point for initializing Direct2D resources.  Because of the way that the SlimDX Direct2D wrapper is written, we only need this Factory to create the Direct2D render target; other Direct2D resources will be created using the render target, which maintains its own copy of the Factory, so we can dispose of the factory once we are done with it here.

After we create the Direct2D render target, we will use it to create an instance of our ProgressUpdate class, which we will cover next.

Our ProgressUpdate class will handle the creation and rendering of a simple progress bar, with some text indicating which stage of the current process we are executing.  Our ProgressUpdate class will need a reference to the Direct2D render target, which we will pass into the constructor and store in the _rt member variable.  We will need to create two Direct2D Brushes for our ProgressUpdate class: a solid black brush to render the outline of the progress bar with, and a solid green brush to use to fill the progress bar and render the status text.  Using the Direct2D SolidColorBrush, we can consider a Brush to be simply a pixel color; Direct2D also provides the ability to use linear and radial gradient, as well as bitmap brushes, although we will not concern ourselves with these now.  My suspicion is that a Direct2D brush is effectively a wrapper around a DirectX texture; this would jive with the need to recreate Brushes when the DirectX device is lost, and the options to change the wrap and texture transforms of the brush, which smacks loudly of the Direct3D texture address modes and texture coordinate transform matrices we have used earlier.

Besides the color brushes, we need to define the rectangular screen-space areas occupied by the progress bar, in the _borderBounds and _barBounds members.  Our progress bar will be centered vertically, stretching across most of the screen.  The border will be two pixels large on each side, so that it effectively outlines the green progress bar.

Lastly, to draw text, we need to create a DirectWrite TextFormat object, which we can think of as a font style.  DirectWrite is a new text-rendering API, which like Direct2D, is meant to supplant GDI, with Unicode support and some other advanced features.  The DirectWrite TextFormat class is quite similar to the older D3DX ID3DXFont interface that was used in Direct3D 9.  To create a TextFormat object, we supply a DirectWrite Factory, a font face name, styles indicating the weight (boldness), style (italic), font spacing, pixel size of the letters and Unicode text locale of the desired font.  We will also specify an additional property, TextAlignment.Center, which instructs the DirectWrite rendering engine to center the text drawn using this TextFormat within its containing rectangle.  Finally, we define the rectangular area in which we will draw the status text for the progress bar, storing this rectangle in the _textRect member.

Because the ProgressUpdate class needs to manage these DirectWrite and Direct2D resources, we will subclass our DisposableClass base class, and implement a Dispose method to clean up these references when the ProgressUpdate object is destroyed.

All Direct2D rendering calls need to occur between a RenderTarget.BeginDraw()/EndDraw() pair.  We begin rendering our ProgressUpdate object by clearing the Direct2D render target to a background color (Color.Silver).  Next, we draw the border of the progress bar by filling the _borderBounds rectangle with the _clearColor brush.  Next, we create a rectangle to represent the progress represented by the prc parameter, by scaling the width of the _barBounds rectangle by the completion percentage value, and then filling this rectangle using the Direct2D RenderTarget.FillRectangle() method.  Because this rectangle overlaps the border rectangle, we will be left with the black edge around the green progress bar.

Finally, we draw the text using the DrawText() method, which takes our message string, our TextFormat object, the text bounds rectangle, and our green Brush.

I swear, we will get to generating random terrains using Perlin Noise.  We’ll also take a look at how we can add regular Windows Forms controls to our application window, which we will use to adjust the parameters used to create the random heightmap.